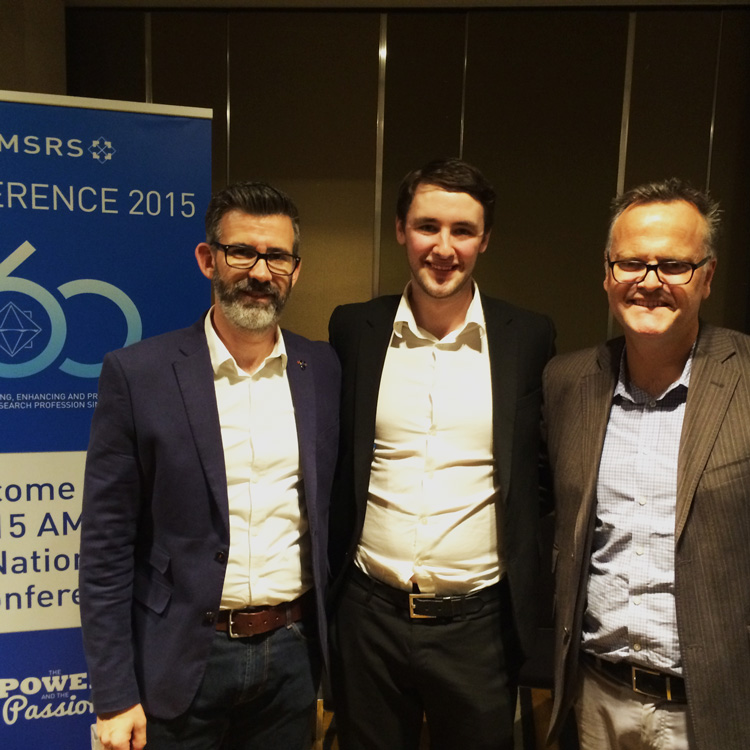 The sports landscape today has never been more competitive or unpredictable. Advancements in mobile and social technologies have transformed how fans watch games and how they engage with their favorite players and teams. At the same time, many teams and leagues are struggling with declining ticket sales, and team performance in the stadium no longer predicts whether fans will show up. So the question that leagues and sports teams need to ask is this: how do we develop a stronger, more meaningful connection with our fans?

In a recent presentation for the 2015 Australian Market Research Society Conference in Sydney, I had the opportunity to explore this issue together with two successful football codes in Australia: the Australian Football League (AFL) and the National Rugby League (NRL). Featuring Shaun Welch, customer development manager at AFL, and George Zdanowicz, CEO of Enhance Research ( a market research agency that runs NRL’s insight community), the interactive presentation focused on the importance of fan engagement today.

Welch and Zadnowicz shared actionable tactics on how to better engage with sports fans. Here are four major takeaways from our discussion:

A study conducted by Vision Critical and Nine Rewards, an access panel from Australia, found that 30 percent of Americans and 18 percent of Australians have switched teams in the past year. In the U.S., an additional 22 percent indicate that they might switch teams in the near future.

These stats reiterate the fact that sports fans aren’t as loyal as they used to be. This is particularly true for the U.S., where sports compete with the rest of the entertainment industry for people’s discretionary income. Many regions in America lack a local team, so many fans support teams out of their region, making fan loyalty even less sticky.

According to Welch, traditional methods of brand tracking no longer suffice as they only provide a snapshot-in-time understanding of the fan. It’s crucial to build a more meaningful relationship with fans. That’s one of the key drivers why the AFL created the AFL Fan Council, an insight community of 12,000 fans, in 2013. The award-winning insight community gives fans an opportunity to share their feedback on many aspects of the league’s business. As a result, fans feel closer to the game and they feel that they are able to voice their views and opinions directly to the AFL, according to Welch.

It’s not enough to engage with fans on a regular basis. Sports teams must learn how to infuse fan intelligence in the organization.

For example, the AFL Fan Focus has driven key changes in how the league makes business decisions, including those that were considered controversial by many. Before the community was launched, some decisions had been made based on ‘gut feel’ or as a reaction to views expressed by the media or feedback from a small but loud number supporters of the league on social media channels and talk-back radio. Alternatively, the league conducted research using non-profiled data or opt-in, ad hoc online polling. But since launching AFL Fan Focus, all areas of AFL’s business have begun asking the question, “can we test that in Fan Focus?”  Welch says that the insight community has provided fans with a platform to get involved in the decision-making that previously had not been possible. And because the community has a wide range of AFL fans, the the league can be confident that the feedback they get reflects the views of the majority of their fans.

According to Zdanowicz, the NRL also taps its community for business insight. In July 2014, it launched the NRL Nation, an insight community of 3,000 fans. The NRL Nation has driven key changes in how the league relates to its customer base. So much so that different departments in the league now regularly engage with the community to ask for fan input. People in the NRL National community also get a chance to shape what is going in within the insight community and how they want to be engaged. For instance, fans usually get a heads up on what engagement activities are coming up. The NRL finds this approach effective since it gives people a view on future topics that interest them.

Fans today want to engage, but they don’t want their time wasted. According to Welch, it’s critical to get a real appreciation of the diverse range of sports fans.

The AFL uses its community to segment its supporters, sending only relevant activities to fans. At the same time, segmentation allows the league to dig deeper into the sentiments of its supporters and get more relevant feedback.

And as one big decision illustrates, deep segmentation helps inform big decisions at the league. Recently the AFL Commission, the league’s governing body, decided to review the structure of its three elite competition formats since anecdotal evidence suggested that it needed adjustments. Research conducted through AFL Fan Focus was used in conjunction with feedback from AFL Clubs (including coaches, CEOs, administration departments) and internal AFL departments to put a recommendation to the AFL Commission to change the format of the pre-season competition.

The AFL Fan Focus enabled the league to understand how the change will impact its diverse supporters and markets. The proposal was reviewed and adopted and subsequent changes were made to the competition for 2014. Post-evaluation of the revised competition format showed significant improvement in satisfaction with the structure of the competition with 52 percent satisfaction in 2014—a 79 percent increase from 2013.

While the NRL uses its community to get feedback about business decisions, it also offers a range of activities to keep engagement fun for people. In the community, NRL runs contests and does quick polls to keep people interested. More importantly, the NRL regularly shares back to the community, giving people an insight into how the community has responded to certain activities.

The NRL also offers exclusive ticket packages customized to the teams that people follow. That way, people get offers that are relevant and interesting to them. For some clubs, the community marks the beginning of their own fan understanding and deeper fan engagement, reveals Zdanowicz.

Both the AFL and the NRL show that developing strong emotional connections using digital methods can get leagues and teams closer to their fans while having measurable positive impact on the bottom line. The role of customer engagement will only grow in the future as the next generation of fans—digitally savvy people who are used to instantaneous feedback and to voicing their feedback—grow in numbers. Teams and leagues must exploit fan intelligence platforms now in order to ensure engagement and, ultimately, profitability in the future.

Customer Insights How to Show the Impact of Your Insight Community... and Scale It