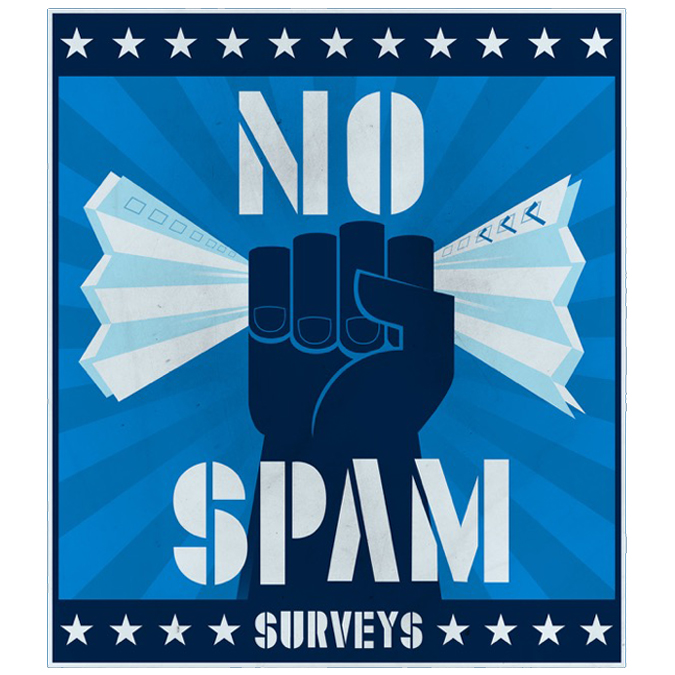 The proliferation of unwanted surveys is an urgent issue for the market research industry. Over the years, unwanted surveys (including unsolicited telephone calls, emails and popups) have damaged the relationship brands have with their customers. They have also significantly damaged the relationship market research has with potential participants.

Concern about surveys is not new, but it’s an issue that’s more critical than ever. Back in 2013, the Australian Government issued a warning to its online citizens to be wary of survey-related spam. This sort of warning heightens the public’s alienation from the survey process, damaging the overall reputation of market research.

In the ebook No Spam Surveys, Vision Critical CEO Scott Miller, makes a case for why traditional surveys are no longer sufficient in today’s business world. “The era of traditional surveys is over,” he writes in the ebook, arguing that companies should consider new tactics to engage and better understand the empowered customer.

What is a spam survey?

A spam survey—just like spam in general—is an unsolicited survey that’s irrelevant to the recipient.

The main features of a spam survey are:

The consequences of spam surveys

Customers have become so annoyed and alienated by spam surveys that many people have withdrawn some or all of their cooperation with companies. Stats show that customer surveys now collect the views of a tiny minority of the population—creating doubts about the validity of the responses. 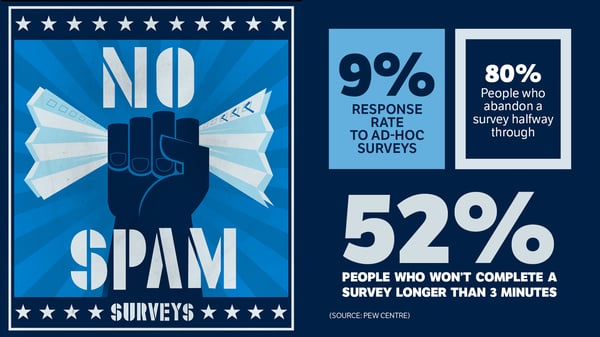 Writing in ESOMAR’s Research World (November 2015), Kathleen Frankovic highlighted that in the U.S. in 1997 “a rigorous effort by public poll” could achieve a 60 percent response rate and regular polls could reach 36 percent. Today, even the best studies only achieve 9 percent—and most achieve much less than that.

"Customers have become so annoyed and alienated by spam surveys that many people have withdrawn some or all of their cooperation with companies."

The second consequence of the rise of spam surveys is that the responses provided to long and boring surveys are plagued with problems of people satisficing (i.e. finding quick and easy ways to complete the survey, rather than answering the questions properly). Researchers and clients often approach this as a problem of bad respondents, but it is mostly a problem of bad surveys. We do not need to change the people—we need to change the survey process!

The research industry has been fighting the wrong battles

This process is still continuing. In the U.S., the FCC is currently proposing to tighten the rules to ban uninvited calls to mobile phones. Not surprisingly, researchers are lobbying for the ability to continue contacting respondents and for FCC to clarify the limits of the proposed new regulation. Some people in the industry have been calling for a different approach. For example, writing in AdvertisingAge, Vision Critical Founder Andrew Reid argues that FCC’s autodialer ban will lead to innovation in marketing and market research.

The market research industry needs to have a long-term view. The status quo when it comes to spam surveys will secure a short-term commercial advantage, but it will continue to erode the long-term relationship between the public and research.

As I discussed in my May 2015 post, there are a growing number of alternatives to spam surveys such as insight communities, in-the-moment research and observational research. (READ: Why the Long Survey is Dead)

"Instead of boring them, empower your customers with feedback as well as questions."

Should all uninvited surveys be banned?

Within market research, there are some occasions where a suitably worded invitation might be applicable. If you’ve put together a conference, for instance, a one-off survey with attendees might be appropriate. However, it’s still necessary to check whether the audience is going to see the invitation as intrusive or unwanted. Ask yourself: will they find the survey boring or irrelevant? If the answer is yes, you might want to rethink your approach.

There’s also a very different case to be made for social research. Many projects exist where the public good depends on contacting a representative sample—for example, studies where the government needs to understand the unemployment figures in order to be able target expenditure and assistance. In these cases, society needs to trade-off the disutility of unwanted surveys against the public good the information can provide.

If market researchers stop using spam surveys, the societal results of social research should improve as the level of frustration with unwanted surveys will probably decline. Both society and the research industry will benefit if spam surveys don’t exist.

If you're annoying your customers with unwanted surveys, the time to stop is now. - @RayPoynter #NoSpamSurveys #MRX (TWEET THIS INSIGHT)

If you’re annoying your customers with unwanted surveys, the time to stop is now. An unwanted survey is spam. As an industry, we need to take a hard stance on long, boring and unwanted spam surveys. The reputation of the research practice depends on it.

A version of this article first appeared on the GreenBook blog.